The second half of the 6th century AD was a significant period in the history of Chinese Buddhism. In the years 577/578 Buddhist believers were subjected to severe persecution, but the reception of the holy scriptures of a religion originating in India was not greatly affected by this. In the course of adapting the foreign doctrine to the indigenous traditions of calligraphy and landscape appreciation, Chinese monks created unique stone inscriptions. The sacred texts were laboriously carved into the natural rock with characters up to nine feet high. The inscriptions were also integrated into the architecture of cave temples. With this “network” of stone inscriptions the Chinese Buddhists created the most significant monuments to the cultural history of northern China that have come down to us.

The objective of the Research Unit is to compile a comprehensive and systematic documentation of these stone inscriptions, some of which have only been discovered in the last few years. One extremely interesting aspect is the fact that the texts are integrated into different spatial contexts. The inscriptions exposed to wind and weather impose a sacral character on the landscape. Monumental stelae proclaim the sacred doctrines, sheer rock faces become places of meditation, great clumps of rock mark the routes taking the pilgrims up into the mountains. In the sheltered cave temples, hundreds of thousands of characters cover the walls. The full meaning of the textual programme only becomes apparent through consideration of the interactive dialogue it engages in with the iconographic programme of the neighbouring pictorial niches. 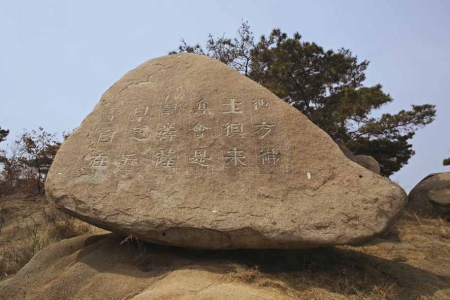 The project is based on international cooperation, notably with Chinese scholars, many of whom in the past few years have been displaying a new and heightened interest in issues connected with religious history. In addition, we have close contacts with Japanese scholars upholding the outstanding Buddhological traditions of their country. At the interdisciplinary level the project involves researchers from the chair of Geoinformatics (GIScience) at Heidelberg University’s Institute of Geography and from the Institute of Spatial Information and Surveying Technology at i3Mainz (Mainz University of Applied Sciences) for clarification of the topographic situation of the carved texts. Via modern 3D laser technology and the establishment of a geodata infrastructure, a web application with analytic tools can be provided that squarely situates the project within the Digital Humanities sector.

Chair of the Commission

Head of the Research Unit